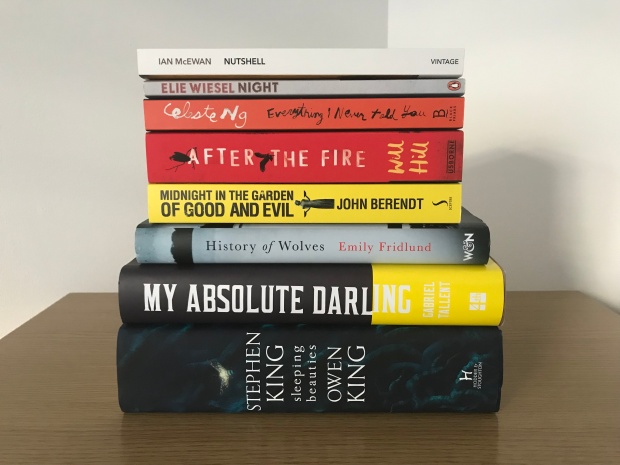 I’ve been on an absolute book buying spree this month. I actually had to cut back on how many books I included because this is actually only a small amount of the ones i’ve bought… oops.

Many of them I don’t actually know what they’re really about, as I prefer to go into novels blind, but I’ve tried to speak about the synopses the best I can at this stage!

At 199 pages, this is actually quite a short book, and the writing is also relatively big, so I’m expecting this to be a quick read. The synopsis to Nutshell is very mysterious, and really doesn’t give that much about the plot away at all, except that Trudy has betrayed her husband John, and is still in their marital home, but instead of John being with her, it’s his brother Claude who has taken his place, and they have a plan. Trudy is pregnant, and her unborn baby is witness to their plot. Whatever that truly means, I don’t know at this point. There’s also six pages of praise for the novel at the beginning, so I’ve got high expectations.

I’ve actually already read this, and really enjoyed it. It’s quite short, but it’s not skimping on any detail or heart-wrenching moments. Written about his time in concentration camps in WW2, the novel follows Elie and his father, who are Jewish, from their beginnings at home, to being forced into concentration camps, the experiences he had, and what life was generally like for those living oppressed by Hitler and the Nazi party.

Everything I Never Told You by Celeste Ng

The synopsis of this novel gives absolutely nothing away, except that Everything I Never Told You follows a Chinese-American family in a small town in the 70s, who’s daughter Lydia dies. Lydia’s death is the premise of the book, and everything happens after she’s died. After her death, the thread keeping the family together is destroyed, ‘tumbling them all into chaos.’ I’m not sure what made me impulsively pick up this book, because I have absolutely no idea what it’s about. Sometimes that pays off, sometimes it doesn’t. I guess we’ll just have to wait and find out!

After The Fire by Will Hill

After The Fire is about a cult, which I am absolutely fascinated by. The synopsis reads: “The things I’ve seen are burned into me, like scars that refuse to fade. Father John controls everything inside The Fence. And Father John likes rules. Especially about never taking to Outsiders. Because Father John knows the truth. He knows what is right, and what is wrong. He knows what is coming. Moonbeam is starting to doubt, though. She’s starting to see the lies behind Father John’s words. She wants him to be found out. What if the only way out of the darkness is to light a fire?’ I’ve watched a lot of cult documentaries over the years, and almost all of them mention members leaving the cult and how difficult it is for them, so I’m kind of expecting After The Fire to be a bit like that. I haven’t really looked into this one, because I was fascinated by the storyline, and I’m hoping it’s not going to disappoint!

Midnight in the Garden of Good and Evil by John Berendt

Fun fact- this book was the bestselling book the year I was born. It’s a true crime novel, which is one of my absolute favourite genres, both book wise and documentary wise. I don’t often read a lot of non-fiction, but when something is billed as a true-crime classic, you can bet I’m right on board. Propelled by larger than life people, Midnight in the Garden of Good and Evil sets the scene in Savannah, 1981 when shots ring out in one of the grandest mansions in the area. The synopsis reads: “A crazy quilt of oddballs, poseurs, snobs, sorceresses and outlaws, John Berendt’s seductive portrait of Savannah society framed by the notorious trial of antiques dealer Jim Williams for murder, became an international bestseller and an instant classic.” I really don’t know anything about this story, so I’m looking forward to learning more.

History of Wolves by Emily Fridlund

I picked up this book after it was long listed for the Man Booker Prize this year. I always read the lists, both long lists and short lists but rarely actually read any of the books on them. Wanting to change this, I’ve decided to make more an effort to push myself out my comfort zone and pick more of them up. So I picked History of Wolves up. Apparently not too keen to jump straight out of my comfort zone, it’s about a fourteen-year-old called Linda who lives in an ex-commune, and is called a freak and a ‘commie’ by other kids at school. Her family mostly leave her alone, so when another young family move across the lake from her, she begins to babysit their son Paul and believes she finally has found a place she belongs, until she begins to feel like something isn’t right, although she doesn’t quite understand. The synopsis really doesn’t give that much away, but with the tagline ‘how far would you go to belong?’ it sounded too interesting to pass by.

My Absolute Darling by Gabriel Tallent

As this post goes live I’m currently reading My Absolute Darling, so I don’t want to give my thoughts at the moment until I’ve actually finished it, as I’m just over half way through. The story follows 14-year-old Julia, better known as Turtle. She lives with her father who has incessantly taught her survival skills, leading to her extreme knowledge of guns amongst other survival skills. She has no friends, no interest in making any, and has an internalised hatred of women, brought on by her father and her upbringing. However, she starts to have a friend, which is where everything begins to change for Turtle. What I would say, is that if anyone is very sensitive to, or triggered by abuse- physical, sexual and mental, this book is not for you. I do plan on writing a review on My Absolute Darling, so you should hopefully be able to read my thoughts on it soon.

To anyone who knows me, this definitely isn’t going to come as a surprise. I love Stephen King’s books, and when I read about the plot to Sleeping Beauties I was instantly sold. This book is massive. His books do tend to be a bit on the longer side, and a 713 pages Sleeping Beauties is no different. A collaboration with his son Owen, the novel is about a virus that spreads through a women’s prison. When they fall asleep they are shrouded in a cocoon-like gauze, and if woken they become feral and violent. In the prison, one woman called Evie is not affected by the sleeping virus, which leaves people speculating why. The abandoned men, left to their own devices begin to fight each other and the female sheriff is trying to stay awake. Sounds really interesting and I can’t wait to get stuck into it.