I’ve been in a bit of a reading slump recently, which carried on mostly through the start of last month, but I’m slowly managing to pull myself out of it now.

It’s getting a bit late to post this now, since it’s mid-April, but I’m going to do it anyway.

In March, I read a total of five books, which is not too bad, although I was off work for half of it, so I definitely could have done a lot better. Some were good, some were not so good, so I’ll finally stop procrastinating and let you know what I thought. 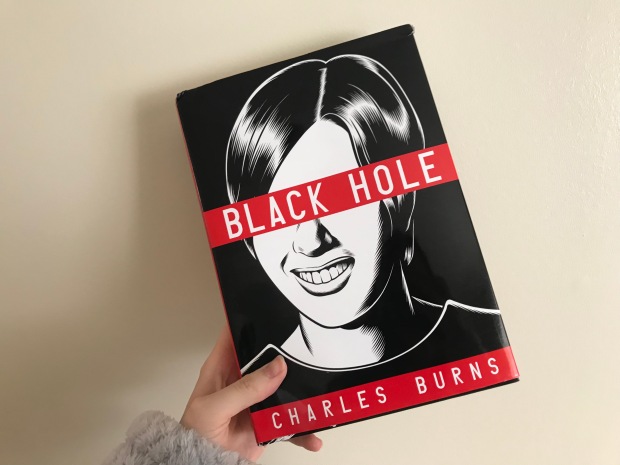 I previously mentioned this book in my graphic novel haul, which I think I posted at the end of February. It’s a pretty hefty volume, and is also hardback, which made it honestly a bit annoying to read, but that’s not the book’s fault.

Honestly, I picked this one up because I thought the premise sounded interesting, and something a bit different from anything I’ve read before.

Spoilers though guys- I didn’t like it. I didn’t even rate it in the end, because I didn’t even know if I could put a star number on how much I was just underwhelmed by this.

The story is set in 70s American suburbia, where a group of teenagers (not a friend group though) are suddenly hit by this mysterious plague, which can have grotesque physical deformities. The kicker though is that it’s passed through sex, and can basically manifest in any way, from facial sores to second mouths to tails – you name it.

You follow a bunch of characters, none of which I found memorable or that I could resonate with in any way. Most of them haven’t got any likeable qualities, and they’re all obsessed with relationships, whether that’s a lost relationship or just wanting to have sex with someone (which to be honest, some of them were.)

I felt a bit like a lot could have been done with it, but it just didn’t go in the direction that I was anticipating, and that I personally was hoping for, as I’m not really much into romance plots within books, or at least, definitely not as the main plot point. There was a murder element to the story which was almost introduced, then introduced another 200 pages later seemingly at random with no backstory attached and barely a motive.

In all, it’s okay. I had no issue with the art style, although it was definitely more ‘graphic’ if you’ll excuse the pun than I was expecting.

The Mother of All Questions: Further Feminisms by Rebecca Solnit

I picked this up from the library as it was on one of the display shelves as you walk in, and it fits in nicely with my bid to read more non-fiction. This is actually the second instalment in a series of feminism-based essays, with the first called Men Explain Things To Me.

I thought I would love this. I didn’t.

I will put it out there – I am not a fan of non-fiction. I can handle some books, but it is definitely not my favourite genre. I would even prefer to read a high fantasy novel over non-fiction, and that’s really not my jam.

To be fair to Rebecca Solnit, there’s nothing wrong with these essays. I enjoyed the one about silence, which explores violence against women, and being able to tell your story, among other things. I just found it tiresome to get through, which is something that I find with almost all non-fiction. It just didn’t really grip me, but I appreciated the sentiments of the essays.

Another non-rating, as I didn’t think it was fair to negatively mark down a book just because I don’t like reading non-fiction essays.

Call Me By Your Name by Andre Aciman

I have definitely cheated with this, as I did the bad thing, and watched the film before I read the book.

However, I did really enjoy the film, which made me pick up Call Me By Your Name whilst on my way to New York. It also had me pining for a long, lazy Italian summer, but instead I got snow. But it’s all swings and roundabouts, right?

This novel follows a relationship as the main plot point, so in all honesty, it’s a wonder I liked it at all. 24-year-old Oliver comes to spend the summer working for 17-year-old Elio’s father at their summer home in Italy. Elio is very quickly taken by Oliver, who acts in a very confusing hot and cold manner over him.

It’s supposed to be about love, but really, it’s far more like obsession, or infatuation. Elio thinks of very little else apart from Oliver throughout the entire book, and even when pursuing other characters (halfheartedly), his time with them is marred by thoughts about Oliver. Who isn’t interested in him. Or is he? I was similarly confused about his motives along with Elio most of the time.

It’s a romance, and yes, it’s like following young love. You experience their entire relationship with them, from before, during, and after. However, the book also revisits the characters much further into the future, 20+ years later. It’s easy to forget then, that the actual relationship takes place over a few months one summer.

A solid four star rating. Probably wouldn’t read again, but would watch the film again. Obviously there’s representation to some degree in this book, as the protagonists are both male. It also briefly looks into cultural differences, with the constant comparison of European culture with Oliver’s American-isms. Which was interesting to a degree.

I am always intrigued by award-winning books, which has taken me on some frankly interesting book journeys over the years (most of them not so good.) This one however, was good.

I will admit that I was very confused at first, as the novel follows 13-year-old Jojo, who is “trying to figure out how to be a man.” For some reason, I totally thought the character was transgender. They are not.

I actually flew through this, it’s only just shy of 300 pages, so it is a short read, however I found myself flicking the page (as I read it as an e-book) with vigour.

It follows Jojo mostly, although some of the story is told from his mother Leonie’s perspective. It also features quite heavily on flashbacks from Jojo’s grandfather’s time in prison, and the story of the life and death of one of his fellow inmates, Ritchie.

Jojo’s father Michael gets out of prison himself, and Leonie, Jojo, little sister Kayla (or Michaela as she’s also referred to) and Leonie’s friend hop in a car and travel to pick him up, while at the same time being embroiled in drugs and ignoring her children’s basic needs. It would be the classic junkie mum, prison dad, neglected children if not for their kind grandparents story, but there’s magic elements in it.

We’re talking magical herbs and ghosts elements. I wasn’t really sold on the ghost part, and the ending was just meh for me, but obviously I won’t spoil it. With the setting, it works, but it’s just a supernatural element that wasn’t really for me.

Four stars. Super easy read, not convinced I fully understood it, and I didn’t care for the ghosts, but I enjoyed it all the same.

I’m actually going to do a full review on Vicious, as I surprisingly enjoyed it so much, so I won’t be writing a lot for this one.

It mostly follows two college roommates – Victor and Eli, who are medical students. As part of one of their classes, Eli decides that his thesis topic is going to be on the existence of EOs, or ExtraOrdinary humans. The original thesis discusses how an EO could possibly come into existence, however, the pair decide to go one step further and try to create EOs – using themselves as guinea pigs.

It flips back and forth through timelines, covering them at college age, them at present day, which is 10 years later, and random points in between.

It is also told from the perspective of several different characters, but mostly from Victor and Eli. It’s interesting, as you get a full insight into just how different the two of them are.

Five stars. Loved it, never really expected to, as it’s been quite hyped on the internet for a while. Looking forward to seeing where the story goes when the next one comes out.

At the end of March, I had read a total of 16 books. Finally I am actually trying to complete my reading challenge and not absolutely sucking at it!

I’ve also managed to create a new widget on the side of my blog, so you can check out the books I’m currently reading and click on my profile from there as well.

Any recommendations, let me know!